The Atomic Cult is the scientific, social, and pseudo-religious organization that oversees the Galactic Federation of Planets, which was established in the year 3000 Post Holy War (P.H.W.). Following the Intergalactic Holy War–the most devastating period of strife in human history–all people finally acknowledged that they could no longer wage war in the name of religion or cultural difference. Millions of highly diverse planetary systems embarked on the ambitious path towards social and political unification throughout the galaxy. This unprecedented effort lasted 3000 years and culminated in the Galactic Federation of Planets, which served as the foundation for the Atomic Cult’s eventual rise to dominance.

Despite the Galactic Federation of Planets’ remarkable success, cracks began to form in its armor and the founders of the Atomic Cult sought to mend these fissures before they could destroy the Federation and centuries of great scientific and social advances. A carefully orchestrated movement spread throughout the galaxy in which the Atomic Cult laboriously toiled to infiltrate the minds on every planet. This brilliant campaign captivated all humans regardless of their divergent cultures and resulted in a single point of universal agreement—serve the Atomic Cult.

The existence of the Atomic Cult and key elements of your future history are now revealed to the 21st century because you are living during a critical period of transition. Exponential technological advances and unprecedented scientific discoveries in your time are essential to the future of human development, however a malevolent force seeks to undermine this progress. A growing fringe element known as the Chaos Storm has has emerged in the 21st century to seed your minds with pseudo-science and irrational thought. The only hope for your future is to relinquish primitive ways of thinking and give yourself over to scientific truth through allegiance to the Atomic Cult.

The Multi-Temporal Mind Assessment and Correction Division (MTMACD) is a potent propaganda arm of the Atomic Cult, known for using the creative arts as tools of indoctrination. One of the few divisions of the Atomic Cult trusted with time-travel to accomplish its missions, the MTMACD sends artists and musicians to key moments in time to ensure the Atomic Cult maintains perpetual dominance.

First University is the research and education based institution, of the Atomic Cult, responsible for the exploration of Universal Theory. Alternatively referred to as Absolute Theory, Critical Theory, or under a more colloquial nomenclature, 42, Universal Theory is a theoretical framework that unifies all physical, social, and psychological sciences across all dimensions and time. This should not be confused with the General Theory of Everything that successfully united general relativity and quantum filed theory early in the 22nd century. 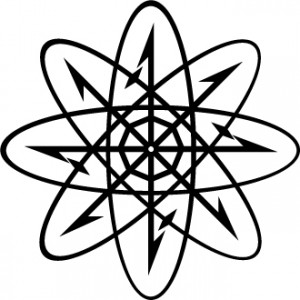