Morbid Eclipse is confirmed to preside with BÖLZER on October 14th, 2015.

Other presiding bands include: Ritual Necromancy, Icon of Phobos, and HIGHLAND

Get your tickets here before they sell out!

“What ensued over the next 30 minutes could be described as a sensory overload of epic proportions, as sonic carnage met visual captivation…Metal magazines and blogs of this planet, I am looking at you and counting on you to stop wasting time and ink on overrated, over-exposed and washed-up rockstars and instead shed some light on this clearly newsworthy band from outer space.”

In an effort to establish its presence in the 21st Century, the Atomic Cult has created a website for Morbid Eclipse.

“Compelling music, high-quality equipment, great visuals, and an easily identifiable logo. Morbid Eclipse have it all to rule the planet, and if you haven’t yet familiarized yourself with them, you are strongly advised to do so and get yourself inducted into the atomic cult in the process, because a Morbid Eclipse live show is hands down one of the greatest things you will ever see.”

“The quartet thundered through their set with a solid presence, sharp playing, and onstage theatrics.”

Witchhammer Productions Thailand has announced it will be re-issuing Morbid Eclipse’ “The Bomb Shelter Session” on an ultra limited, hand-numbered, and highly contemporary cassette tape.

When asked how he felt about the news, Z. Friedberg replied (with hyperlinks and all), “we are pleased to join the ranks of Witchhammer Productions’ great roster of bands, including SABBAT, Metalucifer, Toxic Holocaust, Nocturnal, ABIGAIL/BARBATOS, ANTEBELLUM666, Revenge, Skull Fist, NunSlaughter, etc…….”

Visit their website at Witchhammer Productions for some of the best underground METAL Earth has to offer! 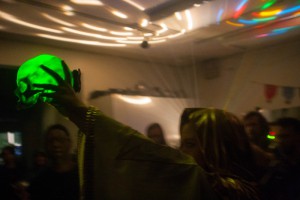 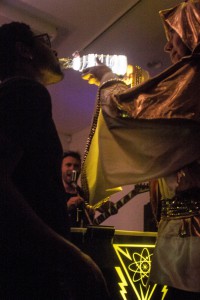 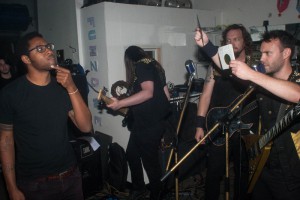 On September 5, 2014 during a highly auspicious ceremony, the Atomic High-Priestess, Jen-Al, of the First Galactic Order presided over the Rites of Ascension where Mike Rivas was welcomed as a new Inductee of the Atomic Cult. Mr. Rivas will play a key role in Morbid Eclipse’ efforts in this century to counteract the deleterious impact of the Chaos Storm. As his first mission, Mr. Rivas has been instructed to recruit prospective Inductees in the greater Los Angeles area. If successful, on his next mission the Atomic Cult will send him into the future on a secret assignment involving interplanetary espionage.

Thanks to the legendary 21st century extreme music documentarian, SexThrash69, for capturing the full performance and ceremony.

Morbid Eclipse is now available for sale at Hells Headbangers.

When you need metal, go to HELL! Shop Hells Headbangers

Morbid Eclipse will appear in San Marcos, CA on August 17th, 2014. If you live in SD, this is your chance to see us live.

Captured by Nocturnal Horns of Antebellum666 on August 17th.