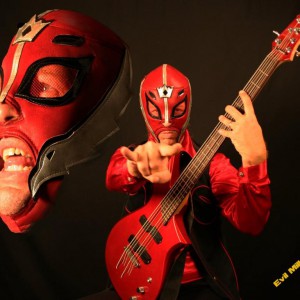 On January 24, 2015 a very mysterious and unique individual received the ritual anointments during The Rites of Ascension. This person was the legendary masked evil doer, Chip Ellis. 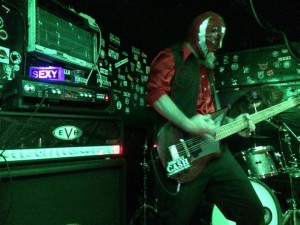 Morbid Eclipse was privileged to have Chip perform the same night with his Rock N’ Roll outfit Fancy Pants and The Evil Doers during their final show in this century (they will return one day far from now…don’t wait you won’t be around). 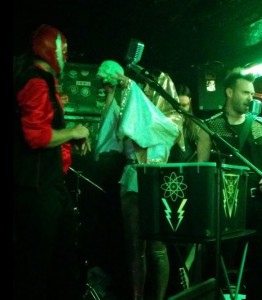 The Atomic Cult took special interest in this Inductees uncanny skills as a luthier, most notably exemplified by his design and construction of the Ugly Stick (seen above). This unparalleled rock instrument features alternating bass and guitar strings to produce a most out of this world sound. Owing to his ingenuity, the Atomic Cult has dispatched Chip to the Luthier District of M31, with long time Morbid Eclipse support WJW, to construct a new guitar for Z.Friedberg powered by plutonium and a flux capacitor.

“The quartet thundered through their set with a solid presence, sharp playing, and onstage theatrics.”

Witchhammer Productions Thailand has announced it will be re-issuing Morbid Eclipse’ “The Bomb Shelter Session” on an ultra limited, hand-numbered, and highly contemporary cassette tape.

When asked how he felt about the news, Z. Friedberg replied (with hyperlinks and all), “we are pleased to join the ranks of Witchhammer Productions’ great roster of bands, including SABBAT, Metalucifer, Toxic Holocaust, Nocturnal, ABIGAIL/BARBATOS, ANTEBELLUM666, Revenge, Skull Fist, NunSlaughter, etc…….”

Visit their website at Witchhammer Productions for some of the best underground METAL Earth has to offer!